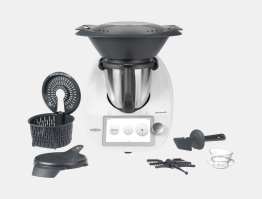 What is a Thermomix®?

Bring your kitchen into the digital age with Thermomix® and explore the various ways of cooking.

With Thermomix®, you can create recipes from scratch. Basics like tomato sauce, mayonnaise and butter can be made without additives found in commercially produced brands.

Thermomix® also makes it possible for you to cook complete meals in a fraction of the time it normally takes. It  already has a large following around the world, from Europe (note: it is called BIMBY®  in Italy, Spain and Portugal), Asia, Australia, Canada, Mexico.

The guided cooking function aids with every step of the recipe. With the help of the now built in recipe portal COOKIDOO® - also available as an app and a web version - you cook thousands of recipes from around the world, create a weekly meal plan and have the shopping list handy on your phone or share it with your designated shopper. Finally everybody in the U.S. has a chance to transform their kitchen

Simply put: everything. When you invest in a Thermomix ® TM6 there are no extra attachments, equipment or spare parts that you’ll need to buy afterwards – everything you need is already included. The accessories include the Varoma for steaming, which helps to preserve the vitamins in fresh ingredients and to cook low-fat meals. There’s also a simmering basket for cooking side dishes such as rice, potatoes or vegetables and for sieving fruit juices, while mousse, cream or egg whites can be whipped to perfection with the useful butterfly whisk. Even the cover for the hole in the lid of the mixing bowl doubles up as a handy measuring cup! Every accessory has been carefully engineered and ingeniously designed to ensure that you can enjoy the full range of possibilities from your Thermomix ® from day one.

Your Thermomix ® comes complete with everything you need, including;